As we begin to mourn the loss… 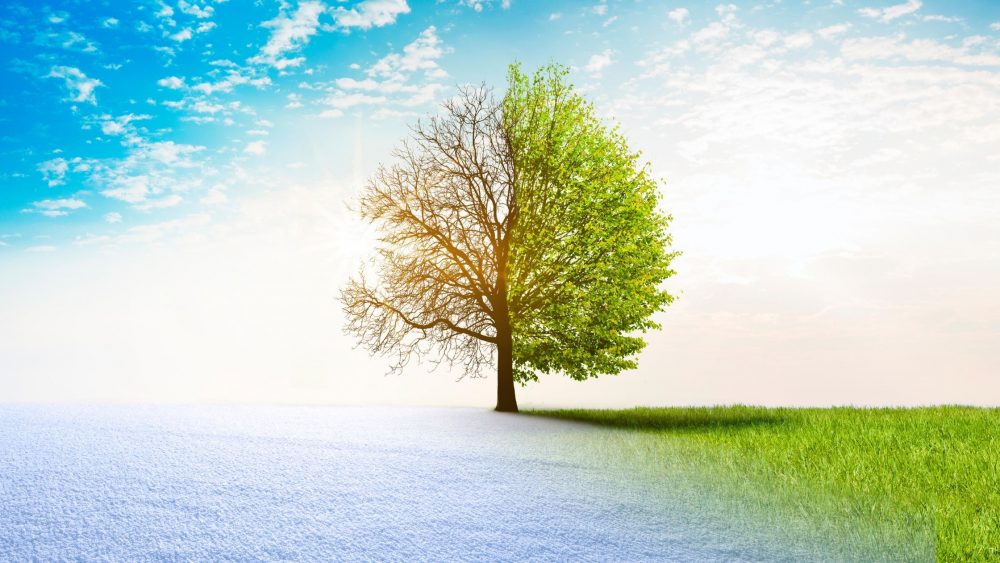 As we migrate to the new AMA CPT Guidelines for Outpatient Office E&M visits, we mourn the loss of what has been our cozy wearing of the 1995 & 1997 Documentation Guidelines.

Out of sentimental respect for the Documentation Guidelines for E&M codes 99201-99215, which have been the cornerstone of the E&M code set, let’s consider the legacy they leave behind. To understand such a legacy, you must revisit the life journey of the guidelines starting at their birth alongside the inception of the evaluation and management (E&M) concept. How do we know where to begin? Well, in your CPT book, each code entry includes the dates of implementation and revisions, with corresponding commentary in the associated editions of CPT Assistant (which you’ll need a separate subscription for). These ques provide useful commentary by the powering body that created, implemented, and carefully crafted the wording associated with each service that is found in healthcare. So, in honor of such sentiment, open your 2020 AMA CPT Manual to page 11 and allow your finger to settle on the entries for either 99201 or 99202 and note their implementation dates. Winter 1991 is the first sighting of E&M codes within CPT Assistant. Honestly, I had a complete geek moment here, realizing I had only been out of high school for a year and had absolutely no idea it was such a historical milestone in healthcare coding! Feel free to laugh at me; my husband did.

Consider the following timeline of change: 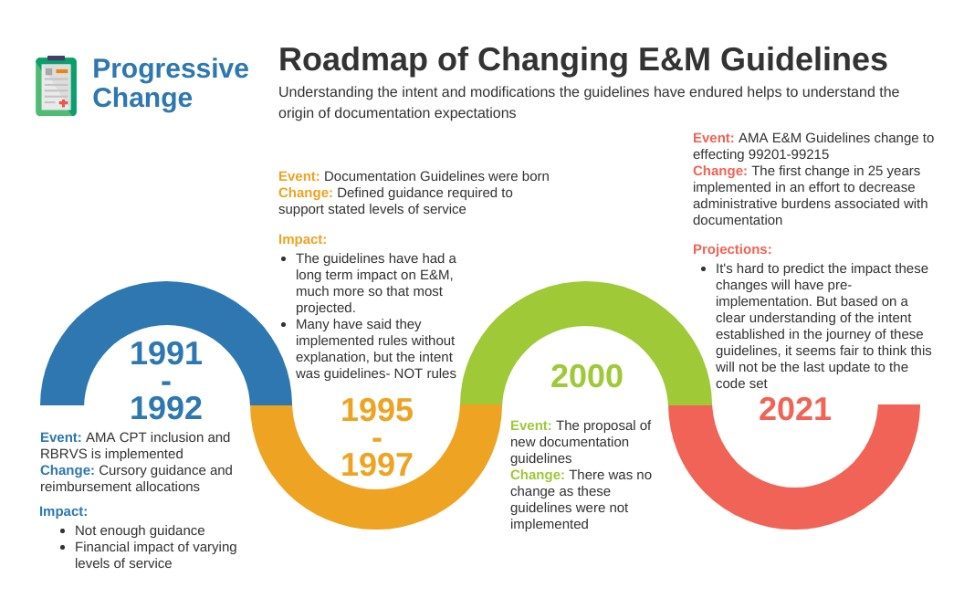 Now, let’s break this down. We have CPT recognition of E&M codes in 1991 to include varying degrees of typical encounter work for each level of service. Consider this example of guidance from the CPT Assistant regarding level of service selection based on levels of medical decision making (MDM):

The problem with such guidance was that it gave the physician the discretion to say it was high-risk decision making without having to substantiate what aspect of the encounter supported that level of risk.

Such casual guidance became a full-blown concern with the additional implementation of the Resource-Based Relative Value Scale (RBRVS) system in 1992, which clearly delineated reimbursement based on level of service. This may have led to the old school habit we sometimes see when providers document the CPT codes or “name” the work performed. It stands to reason that such loose guidance led to, yes you guessed it, folks taking advantage of the system leading to the creation of standards. Such standards would indicate that a provider couldn’t merely state “high-risk decision making,” and suddenly support the highest level.

As this became rather problematic, it became apparent that the provider should include details of the patient’s encounter that demonstrate the high-risk work. Hence the 1995 Documentation Guidelines were developed and established as the commentary to define the specifications between each coding level. Just as they have for 2021, AMA and CMS (then HCFA) presented a united front in the adoption of documentation guidelines:

These guidelines have been jointly developed by the American Medical Association and the Health Care Financing Administration. Our mutual goal is to provide physicians and claim reviewers with advice about preparing or reviewing documentation for Evaluation and Management services.

From the medical perspective, documentation guidelines may seem inconsequential when compared with the many complex and difficult patient care issues facing medicine today. However, with the development of the computerized patient record, the “information superhighway” and studies of patient care outcomes, it is clear that the issue of documentation will remain at the forefront in discussions over the next few years. (CPT Assistant: Spring 1995)

Ok, when you have recovered from your journey down the “information superhighway…” Sorry I couldn’t resist.

The 1995 Documentation Guidelines (DG) became the standard governing E&M services and the amount of documentation expected for each level of patient encounter. As the guidelines came into widespread use, it became apparent that their function quickly morphed from guidance to mandatory rules associated with chronicling the patient’s health history, which, according to the published statement of by the AMA, was not the intent of the guidelines. This was made evident by the criticism that the 1995 DGs lacked clarity. For example, exam criteria included a higher scoring for a “complete single organ system exam” and controversy arose as to what findings must be documented to support a “complete” exam. If the DGs were truly to be used as mandatory rules, then such controversies would necessarily need to be resolved using definitive criteria.

To address such criticisms, a new set of guidelines were created, the 1997 DGs, with the intention of using them to replace the 1995 DGs. The new guidelines used a completely different scoring concept for the exam component and also created an easier approach to capturing the history of present illness (HPI) for management of patient care. However, many providers felt the 1997 DGs’ rigorous exam requirements were overly restrictive, which led to a compromise decision to allow both 1995 and 1997 DGs to be used at the provider’s discretion.

A minor blip in the life of the 1995 and 1997 DGs came in 2000, when guidelines were completely modified in an attempt to create more definitive rules. But this was met with extreme opposition and ultimately the modifications were not adopted.

For 25 years we have focused E&M services on the three key components, together with the utilization of time as a controlling factor. In a few short months, the role these age-old components have played in office-based E&M services will change. Hopefully, by considering the life journey of the guidelines, we can gain perspective on the destination we are headed to in less than 4 months. 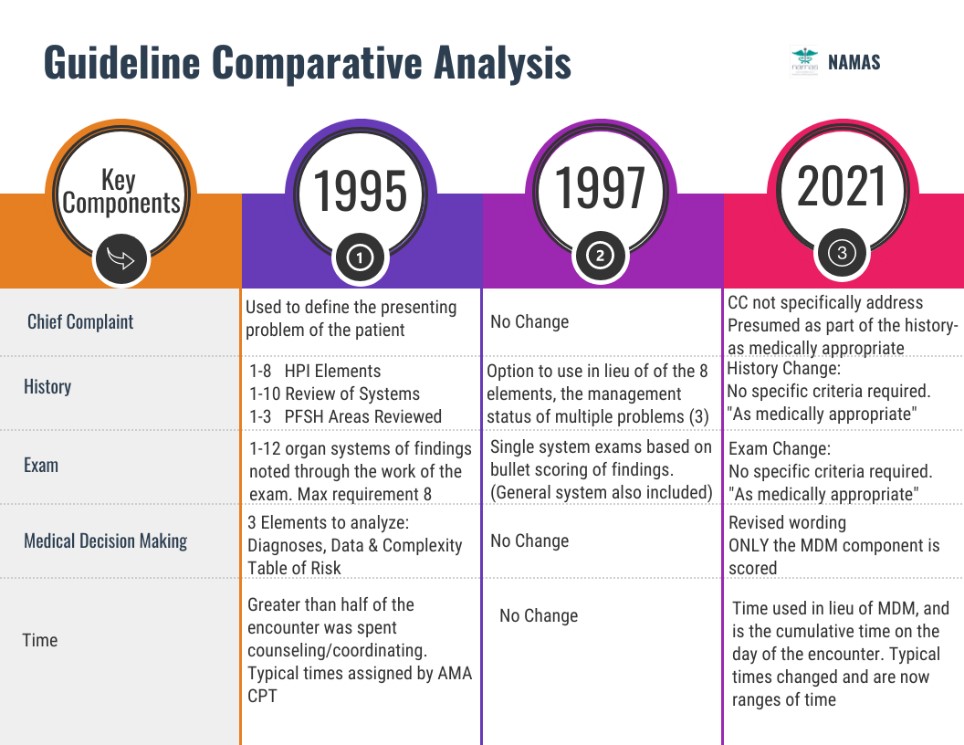