The One Where The Code is IN the Documentation 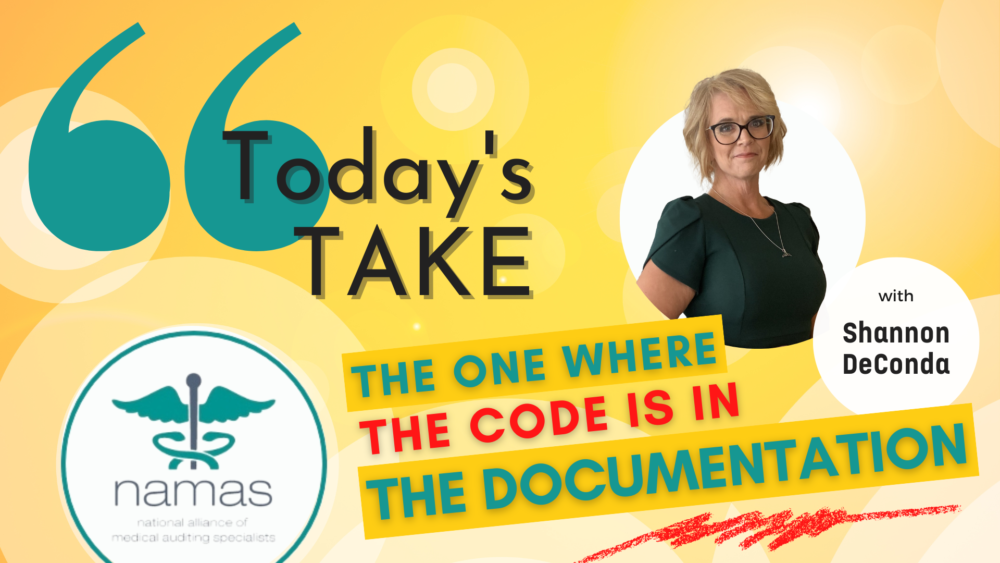 Have you given much thought to an encounter that you might review that actually has CPT or ICD-9 codes documented or included right in the EMR-produced note? (Yes, I do start off many conversations just that way. To be in my head… it’s a scary thing!)

Do we, as coders and auditors, have the authority to even change that code since that code is included in the documentation which is signed by the provider? That’s a little bit different than It being on an encounter form, which is a billing record. This is actually included in documentation that is signed and attested to. Documentation is a legal record. It is signed and attested to, and for us to change that code without the provider creating an addendum…that may represent a little bit more complexity than just changing an intended code.

This is going to require a little bit of involvement from your C-Suite and your Compliance Department. So, I don’t mean to raise red alarms, but…I mean to raise red alarms! We’ve been doing this for years, and look, I don’t see a problem with us, for the most part, modifying or doing coding validation. I understand that is a process, and if your organization has an internal policy that states that coders will review the documentation and the coding by the physician (or the non-physician provider), and modify the coding as needed based on the documentation, I think those policies are fine and you’re within what you need to be as a coder or auditor to append that. However, it is completely different when that code is within the documentation of the encounter, has been signed and attested to, and is part of the legal medical record. That legal medical record has to have an addendum done by the medical provider if the code is not correct. If the documentation is incorrect, it needs to be corrected. The carrier is going to get that claim form with a 99214 -now, they’ve requested the documentation that has a 99215. Ok…which one’s right? We have a discrepancy. We have a contradiction. What’s correct?

So, my suggestion to you is that you need to create a policy. You need to have some type of corrective action here, or you need to go to your EMR vendor and find out if there’s a way to “turn off” the mechanism within your EMR that prints the CPT/ICD-10 codes on your documentation.

So, that’s our Take for today. I know that’s a tough one, but it’s certainly something that needs to be reviewed and considered within your organization.

I hope this was helpful for you. You can also watch my video on this topic on the NAMAS YouTube channel (don’t forget to SUBSCRIBE!) -and you can always get in touch with me at namas@namas.co if I can be of help.

I hope you have a fabulous day!

HIPAA Considerations When Business Associates and Data are International.
December 8, 2022

Problems Addressed Regardless of the Place or Type of Service
November 15, 2022

Incident to isn’t just about E/M services
November 11, 2022
SUBSCRIBE TO OUR BLOG