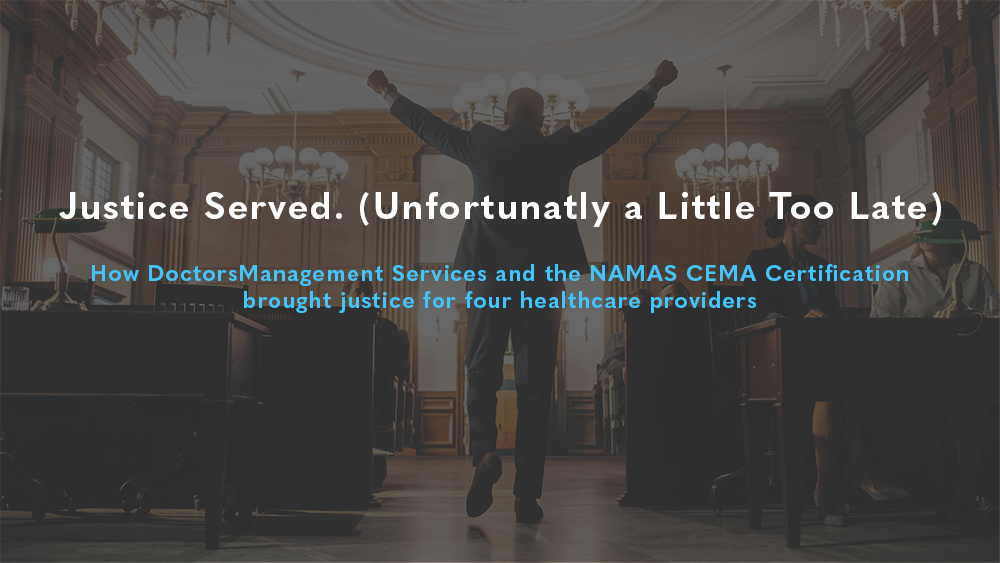 Details of the Case From Expert Witness Sean M. Weiss

Recently, Sean M. Weiss with NAMAS’ parent company DoctorsManagement testified as an expert witness in a federal court case against four healthcare providers in one of the largest Medicare/Medicaid fraud cases in U.S. history.

Read below as Sean recaps the case, or listen to Sean discuss the case with Senior Compliance Consultant, Scott Kraft, of DoctorsManagement here.

I testified this past June in one of the largest (nearly $500 million) Medicare/Medicaid Fraud Case in U.S. history. This case (UNITED STATES OF AMERICA, Plaintiff, v. D-1 RAJENDRA BOTHRA, D-4 DAVID LEWIS, D-5 CHRISTOPHER RUSSO, Defendants (The Pain Centers USA)) should never have seen the inside of a criminal courtroom and is a case study in what can happen when an overzealous, uninformed prosecutor unfairly targets a medical practice for something that is, at best, a potential civil matter.

The four physician defendants, in this case, were all fully exonerated by the jury in a case that infuriates me not just as a physician advocate for the past 28 years, but as a taxpayer. One of the prosecutors in the case even left his position on the day the trial ended.

While this case was conclusively resolved in favor of the defense once the defense attorney and I educated the jury on the facts of the case, the fact it got as far as it did is a lesson for all physicians in being proactive about compliance and procuring the best resources in the event of an audit or investigation. Don’t assume because you know you are innocent that a federal prosecutor looking to make a name for himself won’t target you or your practice.

In the case, the government publicly pushed a narrative that the providers in the group were running nothing more than a “pill mill” and abusing the billing of evaluation and management code 99214. Even other U.S. Attorneys with whom I discussed this case were outraged by the sloppy manner in which it was handled and the lack of due process.

Despite this exoneration, our clients paid a heavy price. Dr. Bothra ultimately spent 3.5 years incarcerated and was denied bail nine times, while two of the providers, faced with taking on the U.S. Government, opted to accept plea agreements and will be sentenced in August 2022 by the same judge who presided over the acquittal of the other four providers in the case.

My involvement began as a consulting expert, working with counsel to understand and see if we could pick apart the government’s allegations of fraud by the providers. There are a ton of facts in this case but to streamline things let me hit the highlights…

The defense in this case did a masterful job of debunking one-by-one the government’s charges against these providers.

Leading the health care fraud portion of the case was Ronald Chapman, II of The Chapman Law Firm. The ability to recognize the failures on the part of the government to perform specific tasks as outlined in their own training manuals was key to the defense and the reason I was asked to testify as an expert. It was also critical that I established my expert credentials – in this case not a college education, but my coding, auditing and compliance credentials. The three credentials that were the focus during testimony were the CPMA, CHC and the CEMA… the CHC was critical in my testimony regarding regulations and compliance (Incident-to) and the CPMA was critical to speak to my knowledge of the audit process.

But the CEMA was the one the one that compelled the jury to accept my testimony since I was able to describe this one as a “Masters” level in Evaluation and Management Services. The fact that I also hold the CPC-P, CMCO, CMPE, CMIS, CMC, and CMOM were all relevant, and I believe the icing on the cake was the CEMA because it made my testimony irrefutable since I was the expert on a “Masters” level for Evaluation and Management Services and the prosecution had no one to match that level of education and subject matter knowledge.

The government contended that a 99214 (pre-2021) required a minimum of 25 minutes to satisfy the billing requirement for this service in addition to 2 of the 3 “Key Components” and that without all of those elements/requirements being met the providers committed fraud.

Any entry-level coder/auditor knows that the time element is only for when counseling and/or coordination of care dominates the face-to-face encounter by 50% or greater. My role was to make sure that, even though the prosecutor didn’t understand this, a jury of regular citizens without health care experience would grasp it. Based on their quick not guilty verdict, it was clear they understood.

The government then contended that a provider in one location performed and billed under their name by ancillary staff or another licensed provider at a different location and that this was another example of fraud.

However, the prosecution failed to consider the definition of a physician-directed clinic, whereby physicians who are part of a group can supervise services rendered by ancillary staff or non-physician practitioners (NPPs), and those services can be billed under the treating physician. The government may not have understood its own policy, but following my testimony, the jury understood.

The direct examination by Ronald Chapman, II then turned to process steps:

As I provided explanation for each of the aforementioned, it became more and more clear the government was unfamiliar with their own rules and regulations/requirements, but the jury understood it meant our clients were innocent.

Fortunately for the defendants in this case, we had a jury that was willing to listen intently, process what they were shown, and deliberate quickly to arrive at the same conclusion I had months before my testimony; they were all innocent of the charges leveled against them!

In 2014 we launched the Strategic Litigation Defense Services (SLDS) Division within DoctorsManagement (DM) with the encouragement of my Partners and with the help of what can only be described as the industry’s best auditors, researchers, and healthcare professionals.

Since 2014, we have assisted hundreds of physicians/providers, surgery centers, suppliers, hospitals, and health systems through their legal counsel build airtight defenses that have led to multiple acquittals at trial, fully favorable rulings at ALJ Hearings, and countless closures of CMS, OIG, and UPIC investigations. We have worked with law firms to create proffers to assist the government with understanding why pursuing a case is a bad idea and have assisted state medical boards with conducting objective, unbiased investigations, and audits of providers who had cases open against them.

In 2022 we are now contracted to more than 30 law firms across the country, working hand in hand with the nation’s best and brightest healthcare-centered attorneys ensuring a level playing field for anyone working in healthcare that needs assistance.

Listen to Sean on The Compliance Guy Podcast

Corrective Action Plan: The Demand from Payors
September 16, 2022
SUBSCRIBE TO OUR BLOG